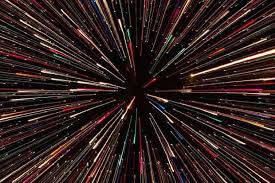 Did you know that the speed of light can be found in the Bible?  Is this just a coincidence, or is it a clue to get us to understand that we need to step out of our comfort zone of looking at scripture literally and consider a new perspective?

And on the east side toward the rising of the sun shall they of the standard of the camp of Judah pitch throughout their armies: and Nahshon the son of Amminadab shall be captain of the children of Judah.

A comment on a verse in the Rigveda by the 14th century Indian scholar Sayana mentioned a speed of light, about 186,400 miles per second, that was chosen so that light would encircle the Puranic universe in one day, making it “the most astonishing ‘blind hit’ in the history of science!”

The physicist Albert A. Michelson in the early 1900’s, using a device known as an Interferometer, stated the speed of light to be 186,400 mps.

The Tribe of Light, also known as the Children of Light in scripture being associated with the speed of light.  Very interesting, especially considering this was written over 3,000 years ago.  Do the texts contain lost wisdom of an older, far-advanced civilization that encoded hidden messages to help us ascend in consciousness now?  All of my research points to an emphatic ‘yes!’

When you find little tidbits like this one, stop and think about deeper possibilities of meaning.  Follow these “bread crumbs” and see where they lead you.  You may be surprised where you end up.

Remember, you are the judge and the jury.  If you want to take this and discard it fully, that is your decision to make.  But I encourage you to keep an open mind about reading the Bible.  If you are reading scripture literally and banking your salvation on that interpretation, you would be wise to do your own research to make sure the church is telling you the truth about these texts.