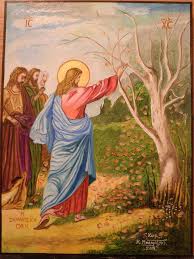 Has this question plagued you? Because it sure did me before I understood that it wasn’t meant to be interpreted literally. The event never happened, it’s a symbolic parable, allegory, but we can look at the Gospel narrative to gain the clarity needed to understand what is really being said. Why would the Prince of Peace kill a fig tree for not bearing fruit, especially when it wasn’t even the season for figs?! Let’s dive in!

This one is interesting because it has two different interpretations depending on which Gospel you are reading.

Another thing to be mindful of is that “Mark” was the first Gospel written, of which the church openly admits: “the first Gospel written” (Catholic Encyclopedia, Farley ed., vol. vi, p. 657), even though it appears after “Matthew” in the Bible, and that the names on the Gospels were affixed to them and do not go back to their respective authors. The proof of those claims comes from none other than the Catholic Encyclopedia itself:

“It thus appears that the present titles of the Gospels are not traceable to the evangelists themselves … they [the New Testament collection] are supplied with titles which, however ancient, do not go back to the respective authors of those writings.” (Catholic Encyclopedia, Farley ed., vol. vi, pp. 655-6)

The Church maintains that “the titles of our Gospels were not intended to indicate authorship”, adding that “the headings … were affixed to them” (Catholic Encyclopedia, Farley ed., vol. i, p. 117, vol. vi, pp. 655, 656).

First, here are the passages in Mark.

12 And on the morrow, when they were come from Bethany, he was hungry:
13 And seeing a fig tree afar off having leaves, he came, if haply he might find any thing thereon: and when he came to it, he found nothing but leaves; for the time of figs was not yet.
14 And Jesus answered and said unto it, No man eat fruit of thee hereafter for ever. And his disciples heard it.
15 And they come to Jerusalem: and Jesus went into the temple, and began to cast out them that sold and bought in the temple, and overthrew the tables of the moneychangers, and the seats of them that sold doves;
16 And would not suffer that any man should carry any vessel through the temple.
17 And he taught, saying unto them, Is it not written, My house shall be called of all nations the house of prayer? but ye have made it a den of thieves.
18 And the scribes and chief priests heard it, and sought how they might destroy him: for they feared him, because all the people was astonished at his doctrine.
19 And when even was come, he went out of the city.
20 And in the morning, as they passed by, they saw the fig tree dried up from the roots.
21 And Peter calling to remembrance saith unto him, Master, behold, the fig tree which thou cursedst is withered away.

“Mark” is not writing about history, because the story is an allegory for something deeper, which is God’s abandonment of the Jewish Temple. The fig tree represents the Jewish Temple Cult. Remember when Jesus right after this event clears the temple, turns over the tables and runs out the money changers, etc? “Mark” is writing after the year 70 CE, which is when the Romans came and not only destroyed Jerusalem but also destroyed the temple and banned the Jewish Temple Cult forever. This is a huge catastrophic event for the Jews because their entire religion was based around the idea of the Temple Cult procuring their salvation every year. You had to engage in certain sacrifices to cleanse yourself of sins to obtain salvation and to be resurrected. So, God decided that it was no longer the season for that Temple Cult to bear fruit, and hence it withered to its very roots and was destroyed.

And in Matthew, which interestingly enough, the passage about it not being the season for figs is left out, so the author is only trying to get you to focus on the “miraculousness” of Jesus withering a fig tree, which should be repugnant to our common sense.

“Matthew” and “Luke” really just borrow from “Mark” and write their own version. This is abundantly clear when reviewing the findings of published, peer-reviewed scholars.

Interestingly enough, the original version of Mark in the Sinai Bible or Codex Sinaiticus, the earliest Bible in existence, begins with Jesus at age 30, has no virgin birth narrative, no mention of Jesus as “the son of God,” the messianic bloodline of David is missing, no sign of resurrected appearances of Jesus, and the resurrection verses found in today’s Bibles are spurious, of which the church openly admits: “the conclusion of Mark is admittedly not genuine … almost the entire section is a later compilation” (Encyclopaedia Biblica, vol. ii, p. 1880, vol. iii, pp. 1767, 1781; also, Catholic Encyclopedia, vol. iii, under the heading “The Evidence of its Spuriousness”; Catholic Encyclopedia, Farley ed., vol. iii, pp. 274-9 under heading “Canons”)

“John” is independent, and is attempting to corroborate the previous Gospels. He rewrites everything in his own unique style but borrows heavily from Josephus’ Antiquity of the Jews, which has a very short paragraph about Jesus that the consensus of scholars affirms is an insertion by early Christians Apologists to try and create a history where there was none.

The 21st Chapter of John is considered to be a 6th-century forgery, of which the church also openly admits: “The sole conclusion that can be deduced from this is that the 21st chapter was afterwards added and is therefore to be regarded as an appendix to the Gospel” (Catholic Encyclopedia, Farley ed., vol. viii, pp. 441-442; New Catholic Encyclopedia (NCE), “Gospel of John”, p. 1080; also NCE, vol. xii, p. 407).

Matthew 21 18-20
18 Now in the morning as he returned into the city, he hungered.
19 And when he saw a fig tree in the way, he came to it, and found nothing thereon, but leaves only, and said unto it, Let no fruit grow on thee henceforward for ever. And presently the fig tree withered away.
20 And when the disciples saw it, they marvelled, saying, How soon is the fig tree withered away!

Okay, time for some esoterics! This is the meat we are looking for that can actually help us in our own journey now. Let’s break down some of the words and what they mean on a spiritual level.

He hungered – the Higher Self needs to be fed and is hungry for spiritual nourishment.
City – consciousness (within yourself during meditation)
Fig – an inward blossoming fruit (fruit of the Tree of Life: love, joy, peace, etc., once the lower nature has been transcended.)
Fig Tree (withered)– “The lower nature which can never of itself bring forth the fruits of the spirit. The lower nature withers away at the word of the perfected Christ-Soul. The emblem here is taken as the lower part, or obverse, of the Tree of Life.” Gaskells
Leaves – a symbol of the blocking out of the “light of the world” or the Higher Self.
Way – inner alchemy of the human body (chakras, kundalini, micro/macrocosmic orbit, etc.) and love and compassion for all living creatures on planet earth.

The phrase “The Way” is found in many religions: Christianity, Buddhism, Hinduism, Taoism and others. “Tao” actually translates as “Way.” That’s interesting, especially when you get into esoteric Taoism you see much information about internal alchemy of the human body. So, is “the way” the art of internal alchemy? Part of it is, the rest of it pertains to promoting compassion, love and understanding to all of humanity. Remember when Jesus said: “Love your neighbor, the greatest of these is love, etc?” That’s the rest of it. Living your life with a smile on your face, which has the power to transform you internally. Taoism speaks about this in great detail. One great source that I have read multiple times and recommend is a book by Mantak Chia called “Awaken Healing Energy Through The Tao.”

As far as the above-passage in Matthew 21, the way is referring to the kingdom within (Luke 17-21) that is found during your meditation. You have to remember that the Greeks wrote the New Testament after being exposed to eastern thought on spirituality around 300 BCE. You can thank Alexander “the Great” for that.  He really wasn’t so great if you research actual history.

The church has misled you and the world, but it’s because some of them are blind and do not mean to, and some of them are making a profit, and it’s time to “overturn the tables” of those who make a mockery of our Father’s (Higher Mind’s) temple.

As the new year is upon us, think about how you can promote love and compassion to all people. I think we could all use some of that.

2 thoughts on “Why did Jesus kill a fig tree?”