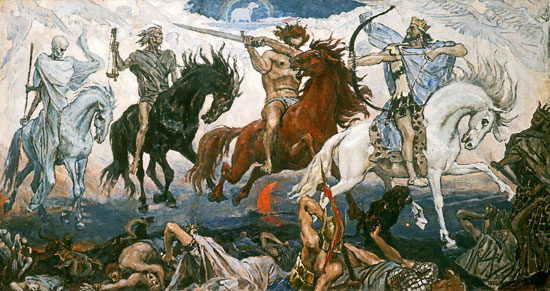 I have memories of these characters in movies like “The Seventh Sign” with Demi Moore, and Clint Eastwood in “Pale Rider.” But what Hollywood misses by using the Book of Revelation literally is the deep spiritual meaning that the riders symbolize within us all.

One thing that is interesting about the Book of Revelation is that it is a copy of a copy of an original. The original being the “Mysteries of Osiris and Isis,” an Egyptian document, which was forged into a collection called the “Sibylline Oracles,” which was then forged around the Jesus character and once again reinvented into what we know today as the “Book of Revelation.” People often associate the Book of Revelation with an end-of-the-world-event, but in reality, it is only talking about the end of a zodiacal age.

The horses comprise four of the seven seals on the Book of Life, which when we look closely at its description in the Bible and interpreting it the way it’s supposed to be interpreted we see that it’s mysticism in its purest form, for the Book of Life is you.

5 And I saw in the right hand of him that sat on the throne a book written within and on the backside, sealed with seven seals.

“Written within and on the backside, sealed with seven seals”

You are the Book of Life and the seven seals are the seven main chakras that run up the spine, and it’s up to you to open the seals of understanding and wisdom within during meditation.

Okay, before we go any further it is vitally important to understand what certain words mean on a spiritual level because the literal is just plain insanity when reading Revelation.

So, in other words, the horse is symbolic of the mind, its higher and lower aspects.

From reading Revelation, we all know that the horses are divided up into four colors. The colors have meaning too, as we will soon see.

6 And I saw when the Lamb opened one of the seals, and I heard, as it were the noise of thunder, one of the four beasts saying, Come and see.

The first horse referenced is a “white horse.” Let’s break that one down to see where it can lead us.

“A symbol of the pure and perfect higher mind with its ideals and aspirations.” Gaskells

The “white horse” is symbolic of spirit, Pegasus from Greek Mythology. We see that the one sitting on him “had a bow,” symbolizing the higher aspirations associated with air, through which the arrow flies, and air is the third stage of consciousness according to the Greeks. The “Crown” comes from Jewish Mysticism and is associated with the higher realms of consciousness. He “went forth conquering, and to conquer” is simply telling you that the Higher Self has dominion (conquered) the lower nature.

Next, we have the “red horse.” The color red is always associated with the emotions, so the red horse is symbolic of your emotional nature. Moses parting the Red Sea is simply another metaphor for parting or moving the emotions out of the way. It means the same thing. The part of the passage that says the following: “power was given to him that sat thereon to take peace from the earth, and that they should kill one another” tells you how powerful emotions can be. They certainly have the power to take peace from the Earth and to make people kill each other.

The “black horse” is next which is symbolic of your intellectual nature. Because when you use your intellect and not your spirit to guide you, you’ll always be in the dark. “he that sat on him had a pair of balances in his hand. 6 And I heard a voice in the midst of the four beasts say, A measure of wheat for a penny, and three measures of barley for a penny; and see thou hurt not the oil and the wine.“

The “balances” are associated with weighing your decisions. “Wheat” and “Barley” are symbolic of wisdom and love respectfully. The reference to not hurting the oil comes from the Sacred Secretion, which the ancients believed is a biological process that renews the body once a month. The “oil” rises up the spine and impacts the Pineal Gland causing a cascade of healing effects in the body. If this interests you further, you can watch a video here.

Wine is “A symbol of wisdom, or spiritual life and truth, which when partaken of by the soul, intoxicates or paralyzes the lower nature, but brings joy and satisfaction to the higher.” -Gaskells. So yeah, don’t hurt the wine either. The scripture itself admonishes the intellect or the black horse and tells it not to hurt the oil and the wine, in other words, let the heart lead, not the head.

Finally, we have the “pale horse” that symbolizes the physical or material. “his name that sat on him was Death, and Hell followed with him. And power was given unto them over the fourth part of the earth, to kill with sword, and with hunger, and with death, and with the beasts of the earth.”

Death and Hell will always follow the physical as we all know. We see the power was given unto them over the fourth part. The fourth part is your four-fold nature: Spirit, Emotion, Intellect & Physical. The actions of the physical have the power to overcome all parts of your nature. The physical can “kill with the sword, hunger, death and with the beasts of the earth.” All references to your lower or carnal nature.

The horses are not coming, they are and have always been inside you.