“There is no way of preserving the literal sense of the first chapter of Genesis without impiety and attributing things to God unworthy of Him.” Saint Augustine of Hippo, a Roman-African early Christian theologian and philosopher from Numidia whose writings influenced the development of Western Christianity and Western philosophy.

“The Scriptures were of little use to those who understood them literally, as they are written.” Higgins Anacalypsis II, Page 270
Origen Adamantius, founder of the Christian School of Caesarea

The creation myth of Adam and Eve actually has its origins in antiquity, far from the Book of Genesis and has been borrowed and modified into the form we find today in the Bible. Let’s take a quick look at some parallels from other cultures from around the world.

In Norse mythology, Líf (identical with the Old Norse noun meaning “life, the life of the body”)[1] and Lífþrasir (Old Norse masculine name from líf and þrasir. Lexicon Poëticum defines this name as “Livæ amator, vitæ amans, vitæ cupidus”, “Líf’s lover, lover of life, zest for life”),[2]sometimes anglicized as Lif and Lifthrasir—female and male respectively—are two humans who are foretold to survive the events of Ragnarök by hiding in a wood called Hoddmímis holt, and after the flames have abated, to repopulate the newly risen and fertile world. Líf and Lífþrasir are mentioned in the Poetic Edda, compiled in the thirteenth century from earlier traditional sources, and the Prose Edda, written in the 13th century by Snorri Sturluson. Scholarly theories have been proposed about the underlying meaning and origins of the two names. (Wikipedia)

In Norse mythology, Ask and Embla (from Old Norse: Askr ok Embla)—male and female respectively—were the first two humans, created by the gods. The pair are attested in both the Poetic Edda, compiled in the 13th century from earlier traditional sources, and the Prose Edda, written in the 13th century by Snorri Sturluson. In both sources, three gods, one of whom is Odin, find Ask and Embla and bestow upon them various corporeal and spiritual gifts. A number of theories have been proposed to explain the two figures, and there are occasional references to them in popular culture. (Wikipedia)

According to the creation myth as described in the Bundahishn, Ohrmuzd’s (Ahura Mazda) sixth creation is the primeval beast Gayomart (Gayamarətan), who was neither male nor female. Ahriman (Angra Mainyu), the Spirit of Evil that dwelt in the Absolute Darkness, sought to destroy all that Ohrmuzd had created and sent the demoness Jeh (Jahi) to kill Gayomard. In this she was successful, but the moon (Mah) captured his seed before the animal died, from which all animal life then grew. From Gayomard’s corpse grew a tree, the seeds of which were the origin of all plant life, and from the branches of which grew Mashya and Mashyana.

They promised to aid Ohrmuzd in his battle with Ahriman, and gave birth to fifteen sets of twins which scattered around the Earth and became the races of mankind. (Wikipedia) 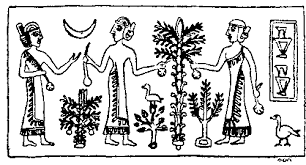 The Sumerian myth Enki and Ninhursag tells the story of the beginning of the world in the garden of paradise known as Dilmun. Ninhursag, depicted as a young and vibrant goddess, has retired for the winter to rest after her part in creation. Enki, the god of wisdom, magic, and fresh water, finds her there and falls deeply in love with her. They spend many nights together, and Ninhursag becomes pregnant with a daughter they name Ninsar (‘Lady of Vegetation’). Ninhursag blesses the child with abundant growth, and she matures into a woman in nine days. When spring comes, Ninhursag must return to her duties of nurturing living things on earth and leaves Dilmun, but Enki and Ninsar remain.

Enki misses Ninhursag terribly and, one day, sees Ninsar walking by the marshes and believes her to be the incarnation of Ninhursag. He seduces her, and she becomes pregnant with a daughter Ninkurra (goddess of mountain pastures). Ninkurra also develops into a young woman in nine days, and Enki again believes he sees his beloved Ninhursag in the girl. He leaves Ninsar for Ninkurra whom he seduces, and she gives birth to a daughter named Uttu (‘The Weaver of Patterns and Life Desires’). Uttu and Enki are happy together for a while, but just as with Ninsar and Ninkurra, Enki falls out of love with her once he realizes she is not Ninhursag and leaves her, returning to his work on earth.

Uttu is distraught and calls upon Ninhursag for help, explaining what has happened. Ninhursag tells Uttu to wipe Enki’s seed from her body and bury it in the earth of Dilmun. Uttu does as she is told, and nine days later, eight new plants grow from the earth. At this point, Enki returns along with his vizier Isimud. Passing by the plants, Enki stops to ask what they are, and Isimud plucks from the first and hands it to Enki, who eats it. This, he learns, is a tree plant and finds it so delicious that Isimud plucks the other seven, which Enki also quickly eats. Ninhursag returns and is enraged that Enki has eaten all of the plants. She turns on him the eye of death, curses him, and departs from paradise and the world.

Enki becomes sick and is dying, and all the other gods mourn, but no one can heal him except for Ninhursag, and she cannot be found. A fox appears, one of Ninhursag’s animals, who knows where she is and goes to bring her back. Ninhursag rushes to Enki’s side, draws him to her, and places his head against her vagina. She kisses him and asks him where his pain is, and each time he tells her, she draws the pain into her body and gives birth to another deity. In this way, eight of the deities most favorable to humanity are born: Abu, god of plants and growth; Nintulla, Lord of Magan, governing copper & precious metal; Ninsitu; goddess of healing and consort of Ninazu; Ninkasi, goddess of beer; Nanshe, goddess of social justice and divination; Azimua, goddess of healing and wife of Ningishida of the underworld; Emshag, Lord of Dilmun and fertility; and Ninti, ‘the Lady of the rib,’ who gives life. Enki is healed and repents for his carelessness in eating the plants and thoughtlessness in seducing the girls. Ninhursag forgives him, and the two return to the work of creation.

The myth represents Ninhursag as all-powerful in that she is able to inflict death on one of the most potent gods and is also the only one who can heal him. Enki and Ninhursag have also been cited, however, as the basis for the biblical story of creation found in Genesis. Orientalist Samuel Noah Kramer writes:

Perhaps the most interesting result of our comparative analysis of the Sumerian poem is the explanation which it provides for one of the most puzzling motifs in the biblical paradise story, the famous passage describing the fashioning of Eve, “the mother of all living”, from the rib of Adam – for why a rib? Why did the Hebrew storyteller find it more fitting to choose a rib rather than any other organ of the body for the fashioning of the woman whose name, Eve, according to the biblical notion, means approximately “she who makes live”. The reason becomes quite clear if we assume a Sumerian literary background, such as that represented by our Dilmun poem, to underly the biblical paradise tale; for in our Sumerian poem, one of Enki’s sick organs is the rib. Now the Sumerian word for “rib” is ti (pronounced tee); the goddess created for the healing of Enki’s rib was therefore called in Sumerian Nin-ti “the Lady of the rib”. But the Sumerian word ti also means “to make live” as well as “the Lady of the rib”. In Sumerian literature, therefore, “the Lady of the rib” came to be identified with “the Lady who makes live” through what may be termed a play on words. It was this, one of the most ancient of literary puns, which was carried over and perpetuated in the biblical paradise story, although there, of course, the pun loses its validity, since the Hebrew words for “rib” and “who makes live” have nothing in common. (149)

Aside from the influence on the later biblical tale, the myth makes clear the power of the mother goddess in Sumerian belief. None of the male gods who have participated in creation – not even the most powerful such as Anu or Enlil – can do anything to heal Enki; only the mother goddess can draw out the sickness and turn death into life. In all the myths concerning her, Ninhursag is associated with life and power, but Enki comes to rival and, finally, dominate her.
https://www.ancient.eu/Ninhursag/

The above stories or myths are just a small sampling of what truly exists in antiquity. There are so many more creation myths out there including Native American, Egyptian (Atum/Adam) and so on and so forth. Embarking on a quest to understand world mythology is the beginning of understanding world religion. Once you start researching, the similarities become jaw-dropping.

Now that we have briefly covered various creation myths, let’s take a closer look at what the names “Adam” and “Eve” mean spiritually.

Gaskells defines Adam (lower aspect) as: “A symbol of the lower mind energised from the desire plane, but receptive of impressions from the higher nature. This is the “fallen” mind (Adam).”

And Adam (higher aspect) as: “A symbol of the Divine nature of humanity, the Archetypal man on the three higher planes.”

Gaskells defines Eve as: “A symbol of the emotion-nature united to the mental-nature of the lower mind.” (lower aspect of Adam)