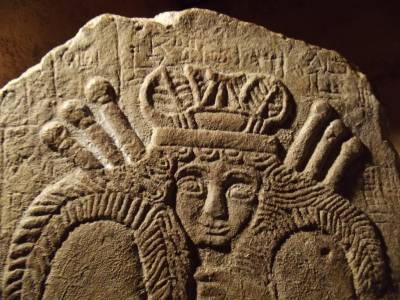 Ninhursag (seen in the image at the beginning of this article) was the ancient Sumerian mother goddess of the mountains who was worshipped over 5,000 years ago (3000 BCE), and one of the seven great deities of Sumer (the major god of the Sumerian people). She is principally a fertility goddess. Temple hymn sources identify her as the “true and great lady of heaven” and kings of Sumer were “nourished by Ninhursag’s milk”. Sometimes her hair is depicted in an omega shape and at times she wears a horned head-dress and tiered skirt, often with bow cases at her shoulders. Frequently she carries a mace or baton surmounted by an omega motif or a derivation, sometimes accompanied by a lion cub on a leash.

She was also known by other names including Ninmah (great queen), Ninto (lady of birth), Aruru (bright lady of the hollow), Belet-lli (lady of the gods), and, wait for it… Mama, Mamma and Mami.

It appears to have its origins from a baby’s first word typically being “Mama.”  Simply because of the “M” sound is easy to sound out for a child.  And since this is typically the first word spoken by a baby, the early Sumerians considered it to be divine, hence the name of the goddess being Mama.

This was carried forward through the ages but the original myth and meaning were simply forgotten in the annals of time.  How quickly we forget.

And that is why you call your Mama “Mama.”

I’m pretty sure that there are more sources out there pertaining to this topic.  If you know of any more, leave a comment.  That’s how we grow together.