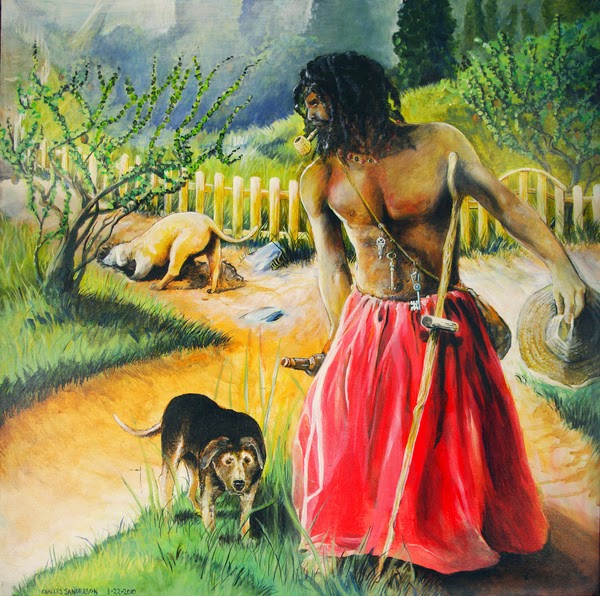 The word ‘Vodun’ and the Haitian word ‘Voodoo’ come from the African Fon language, which is still spoken today in Benin, a country in Africa located between what is known today as Togo and Nigeria. Vodun means “spirit” or “deity”.

The history of Voodoo does not start, as many people believe around 1500 CE in Haiti, but about 15,000 years BCE in Africa. Thus, the real source of Voodoo is Egyptian culture. These people would later come to be called “Yoruba.” They were slaves to the Pharaohs and Kings of Egypt, but eventually, these people were released however they never forgot the things that they saw and experienced in Egypt. They had a profound admiration for God and an equally profound desire to have an intimate relationship with what that meant to them.

At that time, the Yoruba people crossed from Egypt into Africa, using a route that crossed over into Africa from the Nile and into Niger. In this area of today’s Nigeria, at that time, dwelled a culture called the ‘Nok’. Between 200 and 500 BCE, the Yoruba met the Nok and the two cultures slowly began to merge. Under the leadership of the Yoruba King Oduduwa, the people of Yoruba settled down in the city of Ile-Ife, which was considered a holy and sacred city by the natives. Descendants of this nation conquered large areas and laid the foundation of the Yoruba kingdom and spread Voodoo throughout all of the conquered lands.

In 1492 CE, Columbus discovered the island known today as Haiti, which he named “Hispaniola”. Very quickly, the settlers discovered the sugar cane and tobacco, as well as the benefits of cotton, and agricultural wealth of Haiti. The original inhabitants of Haiti proved to be poor slaves and very susceptible to illness and disease. So King Charles V of Spain ordered the deportation of thousands of blacks from Africa to meet the demands of the Spanish colonists in Haiti. The black slaves of the Yoruba soon began to merge cultures and religions and laid the foundation for what we know today as Voodoo.

From the 16th to 19th century nearly twelve million people were deported from Africa. Of the survivors, a little bit more than forty percent went to the Caribbean (Haiti, Cuba and Jamaica), Brazil, North America and the remaining in Spanish, French and Dutch South America. Therefore, Haitian Voodoo developed, the Cuban variation of Voodoo Santeria as well as the Brazilian variations of Voodoo Candomble and Umbanda.

In 1996, Voodoo became recognized as an official religion in Benin, Africa. On April 4th, 2003, Voodoo was officially recognized as the religion of Haiti. As a result, Priests and Priestesses are now able to perform baptisms, funerals and marriages. After Voodoo came into prominence, even the Pope recognized Voodoo as a separate religion due to Voodoo Priests having allegedly healed so many people and it’s notoriety spreading far and wide.

We have all heard of Voodoo being associated with the Bayou region of Louisiana. At the time it was introduced, it was actually owned by the French and called “French Louisiana,” before the Louisiana Purchase. The Fon and Yoruba people, as well as the Bambara, Mandinga, Wolof, Ewe, Fulbe, Chamba, Congo, Ibo, Ado, Hausa, and Sango of Africa,  arrived from 1719 to 1731 and brought their cultural practices, languages, and religious beliefs rooted in spirit and ancestral worship. All of the groups were responsible for the development of Louisiana Voodoo.

Heaven and hell do not exist in Voodooism. Why? In Voodoo, they believe in reincarnation. Someone who has been a good, honest and faithful person has the chance to ascend to Loa or higher form. Thus they are given not only the power and influence but the opportunity to shape the world using their divine gifts. If the person was misbehaved or had an angry or ill temperament, they will be again be born as a human and begin a new life cycle. They again will have every opportunity, but all the temptations from before will still threaten to ensnare them.

The belief of Voodoo involves primarily light punishment for offenses. However, serious offenses are believed to be punished with misfortune or illness, or rebirth as an animal. If the person was particularly bad, they can be reborn as a Diab, a demonic creature that only aspires to harm the living. Voodoo believers believe that Loa, as well as Diab, are omnipresent (everywhere at the same time), and therefore both take part in one’s everyday life and are informed about all actions and misdeeds of believers.

Papa Legba, also known as the God of Crossroads, is a God in the Vodun (Voodoo) religion of Haiti.

He appears as either a child or a hunched old man with a crutch. You can actually see the crutch represented in the veve shown at the beginning of this article. A veve is a religious symbol commonly used in different branches of Vodun (Voodoo), such as Haitian Vodou (Voodoo). The veve acts as a beacon for the god, and will serve as the god’s representation during rituals.

In Haiti Voodoo, Papa Legba is worshipped in two different forms: as a child or as a hunch-backed, fragile, old man with a cane, straw hat and pipe. Both of these forms express his speed, wit and unpredictable behavior. He is sometimes seen as a cheater but also as a messenger of destiny. He is a rebellious and unruly child and a wise man at the same time. In some myths, Papa Legba is a thief, as he has stolen the secrets of gods and given them to his people.

Every ritual starts with invoking him using the veve or symbol above and ends by saying goodbye to him. This is because he is the guardian of the door, therefore the contact with him enables better communication with other gods. During the ritual, he is acting as a messenger of gods as he is translating the words of gods, ghosts or spirits into human language. Those who died can return back to the world of living people if they obtain Legba’s blessing, of which he can also deny.

The American culture and Christian religion have demonized Legba or his likeness (which can be seen in movies like Disney’s “The Princess and the Frog,” where he is known as Dr. Facilier) as a representation of the devil looking to make a deal. But that view simply comes from ignorance and a lack of actual research into this fascinating myth with its origins in Egypt. In blues lyrics and lore, Legba has also been referred to or identified as “the Devil”, further cementing his image with something dark and evil in the U.S.

So much of our current world religions got their start in Egypt, but you won’t know that unless you research real history. Not what’s spouted in school classrooms, but reading peer-reviewed scholars like Richard Carrier and the like is where you gain historical wisdom.

He’s not “evil” at all but a keeper of the keys, which are used to open new pathways for you, for your good, not for your demise.

His veve above interests me greatly. I have seen references to four keys intersecting, and of course, you can see his cane represented in the area to the far right, near the three “stars”.

What I see are the four cardinal directions, North, South, East and West. And I find it most peculiar that the cane and three stars are associated with the East. The number 3 in mysticism represents “new life, resurrection or rebirth”, and the East is always symbolic of your higher, spiritual nature. When the mighty wind blew to part the Red Sea in the Moses narrative, it was an “easterly” wind. The Garden of Eden was planted “East of Eden”. The Tribe of Judah in the Book of Numbers camped at the “right side” or “east” toward the rising sun. The right side is always East because when you face true North, East is always on the right side or right hand, which is where Jesus sat, remember? Careful around that rabbit hole…you don’t want to fall in…or do you?

The cane being shown in the East or right side says to me that the East can assist you in your spiritual journey, or simply, if you choose to dwell in your higher nature, life will be much easier and your life will be blessed.

Anyway, that’s my take on Papa Legba and the ancient Voodoo religion. Thanks for stopping by and I’ll see you in the next article!