The name “Lucifer” is only referenced one time in the Bible in Isaiah 14-12 that says: “How art thou fallen from heaven, O Lucifer, son of the morning! how art thou cut down to the ground, which didst weaken the nations!”

The mental laziness of fundamentalist churchgoers knows no bounds. Little do they know that associating Lucifer with Satan or the Devil is a complete and total fallacy or a mistaken belief based on an unsound argument.

This reference to Lucifer in Isaiah, if you actually read the text, is obviously applied to an unnamed Babylonian king that was an enemy in war with the Israelites. So, the name Lucifer is applied in a mocking way to this king after he is defeated. Early church founders felt the same way.

John Calvin said: “The exposition of this passage, which some have given, as if it referred to Satan, has arisen from ignorance: for the context plainly shows these statements must be understood in reference to the king of the Babylonians.” Martin Luther also considered it a gross error to refer this verse to the devil.

Cosmologically, Lucifer is associated with the planet Venus, known by the ancients as the “Bright and Morning Star”.

Unbeknownst to many, Lucifer is a Latin word that means “Lightbearer”, “Lightbringer”, “Bringer of Dawn”, “Shining One” or “Morning Star”.

Here is the passage from the Latin Vulgate (late 4th Century) for proof:

When the KJV and other Reformation-era English translations were written, Lucifer was already seen as a proper noun for Satan.

The Old English Poem gives five instances of Lucifer being used as a proper noun before the KJV was written:

The earliest citation there, Christ & Satan, is an Old English poem which seems to date to the seventh century or so. I don’t know when Lucifer was first used as a proper noun in other languages, but as just one pre-KJV example, it’s used in Dante’s Inferno.

So, when the Reformation-era English translations were produced, the translators, in keeping with the common (though not universal) interpretation that Isaiah 14:12 used a proper noun for Satan, translated it with the existing common translation: Lucifer.

“Lucifer” is used in Bible translations even before the King James Version (circa 1611). The Geneva Bible uses it (circa 1587): 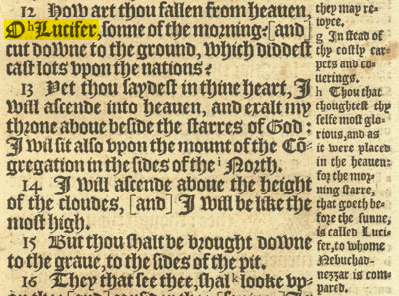 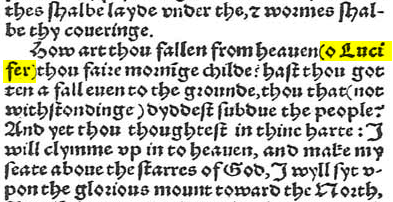 I would imagine that the King James Version translators kept the Latin word “Lucifer” because everybody else is doing it so why not us?

Madame Helena Petrova Blavatsky, a well known Russian Occultist, Philosopher and expert of esoterics, in her work entitled “The Secret Doctrine” had some interesting things to say about Lucifer:

* “Esoteric philosophy admits neither good nor evil per se, as existing independently in nature. The cause for both is found, as regards the Kosmos, in the necessity of contraries or contrasts, and with respect to man, in his human nature, his ignorance and passions. There is no devil or the utterly depraved, as there are no Angels absolutely perfect, though there may be spirits of Light and of Darkness; thus LUCIFER – the spirit of Intellectual Enlightenment and Freedom of Thought – is metaphorically the guiding beacon, which helps man to find his way through the rocks and sandbanks of Life, for Lucifer is the LOGOS in his highest, and the “Adversary” in his lowest aspect – both of which are reflected in our Ego.” (Vol. 2, p. 162)

* “In antiquity and reality, Lucifer, or Luciferus, is the name of the angelic Entity presiding over the light of truth as over the light of the day. In the great Valentinian gospel Pistis Sophia it is taught that of the three Powers emanating from the Holy names of the Three Tριδυνάμεις, that of Sophia (the Holy Ghost according to these gnostics – the most cultured of all) resides in the planet Venus or Lucifer.” (Vol. 2, p. 512)

* “It is but natural – even from the dead letter standpoint – to view Satan, the Serpent of Genesis, as the real creator and benefactor, the Father of Spiritual mankind. For it is he who was the “Harbinger of Light,” bright radiant Lucifer, who opened the eyes of the automaton created by Jehovah, as alleged; and he who was the first to whisper: “in the day ye eat thereof ye shall be as Elohim, knowing good and evil” – can only be regarded in the light of a Saviour. An “adversary” to Jehovah the “personating spirit,” he still remains in esoteric truth the ever-loving “Messenger” (the angel), the Seraphim and Cherubim who both knew well, and loved still more, and who conferred on us spiritual, instead of physical immortality – the latter a kind of static immortality that would have transformed man into an undying “Wandering Jew”.” (Vol. 2, p. 243)

* “The Fall was the result of man’s knowledge, for his “eyes were opened.” Indeed, he was taught Wisdom and the hidden knowledge by the “Fallen Angel,” for the latter had become from that day his Manas, Mind and Self-consciousness. In each of us that golden thread of continuous life – periodically broken into active and passive cycles of sensuous existence on Earth, and super-sensuous in Devachan – is from the beginning of our appearance upon this earth. It is the Sutratma, the luminous thread of immortal impersonal monadship, on which our earthly lives or evanescent Egos are strung as so many beads – according to the beautiful expression of Vedantic philosophy.

“And now it stands proven that Satan, or the Red Fiery Dragon, the “Lord of Phosphorus” (brimstone was a theological improvement), and Lucifer, or “Light-Bearer,” is in us: it is our Mind – our tempter and Redeemer, our intelligent liberator and Saviour from pure animalism. Without this principle – the emanation of the very essence of the pure divine principle Mahat (Intelligence), which radiates direct from the Divine mind – we would be surely no better than animals.” (Vol. 2, p. 513)

Lucifer is actually a representation of the higher aspects of the mind. The lower aspects being “Satan”. Scripture abounds with a duality that is heavily encoded in its text. None of these stories were supposed to be taken literally, ever.

And to wrap up, the following:

The practice of using and keeping a Latin word in an English Bible has its downfalls. Especially when we look at a passage in Revelations where Jesus identifies himself as the bright and morning star or Venus:

Revelation 22:16 (KJV)
16 I Jesus have sent mine angel to testify unto you these things in the churches. I am the root and the offspring of David, and the bright and morning star.

If the biblical translators had chosen to translate this verse using Latin just as they did with Isaiah 14:12, it would read “I, Jesus, am Lucifer.”

10 thoughts on “The Mystery of Lucifer’s Identity”